The liberals in Congress are at it again. (This is about liberals in Congress, not ordinary liberals who may be as outraged as I am by Congressional proposals.) They always say conservatives attack freedoms, and to them we are against freedom when we are against abortion on demand. They say we are for big government, if we want laws to protect children from Internet pornography. They say we are against the rights of convicted criminals, if we support the death penalty. Many people believe the positions conservatives have on the above issues make good common sense, however. Like the right to have a gun trust.

Liberals, however, are showing their true colors in waging a war on the First Ammendment. They are the ones that are against the rights of the common man. They have proposed bills in the United States House of Representatives and United States Senate that will greatly restrict the free speech rights of law firms, public interest groups, churches, pastors, denominations, non-profit organizations, individuals, and others to influence public opinion.

Under the Lobbying Disclosure Act 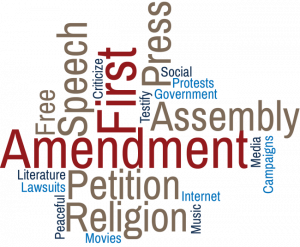 of 1995, lobbyists and lobbying firms who are paid to contact public officials on behalf of a client face registration and reporting requirements. Under proposed House Bill 4682 and Senate Bill 1, a new class of lobbyists would be created that would face registration and reporting requirements-individuals and organizations that spend a certain amount of money in an attempt to stimulate “grassroots lobbying.” This is nothing but an attack, a war, on the First Ammendment by liberals, because they are tired of hearing from churches and other organizations on basic issues. It would not affect only churches and Christian organizations, however. It would affect anyone who spends a certain amount of money to generate lobbying.

Under these outrageous proposals, would conservative talk show host Rush Limbaugh be considered a lobbyist for urging listeners to contact an elected official concerning a certain issue? Would a liberal talk show host under the same circumstances be considered a lobbyist? Would Oprah or Montel be considered lobbyists, because after all, they do spend a good deal of money for their shows? They do sometimes ask their listeners to take a certain position on an issue – like estate planning and trusts.

Under Amendment 20 to Senate Bill 1 on January 10, provisions dealing with grassroots lobbying firms would be eliminated. It would ensure that individuals, organizations, churches, and public interest groups would be subject to lobbyist reporting requirements.

Under this blatant war on the First Ammendment by liberals in the United States House of Representatives and United States Senate, churches, especially large ones, denominations, public interest groups, and other groups that encourage individuals to become involved with federal legal issues would be considered “grassroots lobbying firms.” They would have to register with Congress. They would be forced to make quarterly disclosures about their activities. Their reports would be available on a searchable government website. Under the proposed law, a church or other exempt organization could trigger the new filing and registration requirements as a “grassroots lobbying firm.” The new proposed bills even include financial and criminal penalties for failure to comply.

The two proposed bills are very similar in what would be a war on the First Ammendment by liberals, but they do have some differences.

For example, if a church or denomination spent $50,000 in any quarter to support a proposed Federal Marriage Ammendment or to lobby in favor or against a judicial nominee, it would be a “lobbying firm,” subject to the law.

If you are as outraged as I am by this blatant attack on the First Ammendment by liberals in Congress, write to your Senator or Congressman and urge him or her to vote against these bills. I have already written to my two Senators. If this is how the Democratic leadership thinks they can support the common man, their ideas are totally twisted!